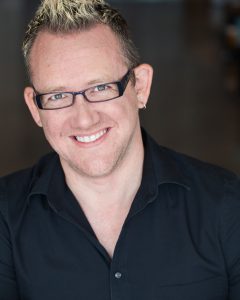 My approach to working with the singing voice addresses both the commonalities shared by all vocalists and the qualities unique to each individual’s instrument and stylistic pursuits. As a musical theatre specialist, my voice work begins with an acting-centered approach and explores vocal expression as a means of communicating specific choices.

My Perspectives on Training for the Industry:

Singing voice work is especially useful for a variety of professional pursuits, including film and television, musical theatre, and other live performance contexts. My philosophy for training the singing voice is two-pronged: first, one should develop fundamental skills that promote healthy, sustainable use of the vocal instrument. Second, the natural colors, shadings, and acoustic parameters particular to the individuals’ instrument should also be honed, so that the performer retains his or her versatility while also possessing the ability to offer unique interpretations.

Adam Roberts has served as artistic director, choreographer, or musical director for a wide range of companies, productions and initiatives throughout his career, with choreography credits including two European concert tours. His students have appeared in principal roles on Broadway, off-Broadway and in regional theatre, been nominated for the Tony Award, and appeared in film, national tours, and on network television. Adam’s Austin-area credits include productions and/or faculty positions with The Actor’s School (Voice Faculty/Head of Musical Theatre), the Austin Jewish Repertory Theater (Artistic Director), The Long Center for the Performing Arts (Resident Musical Director for Education), TILT Performance Group (Co-Artistic Director), Austin Conservatory of Theatre, Austin Shakespeare, Ballet Austin Academy, Ground Floor Theatre, The Paramount Theatre, The State Theatre School of Acting, Trinity Street Players, Texas Arts Project, ZACH Theatre, Zilker Theatre Productions, and other entities producing and educational. He also serves Austin’s St. Luke United Methodist Church as musical director. In addition to his role as musical director of Music Theatre Online and Libretto with the New York Public Library for the Performing Arts, Adam was for several years a contributing writer and arts critic with The Austin Chronicle. He holds a Master’s degree in Music and College Teaching Certificate from the Florida State University and received undergraduate degrees from Kent State University and Youngstown State University’s Dana School of Music. Adam holds membership in the Voice and Speech Trainers Association (VASTA), The Voice Foundation (TVF), and the Stage Directors and Choreographers Society (SDC).  Currently Adam is the Musical Director for the ground-breaking musical Next to Normal at The Ground Floor Theatre which runs December 5-21, 2019.